The simple look of the Google search page hasn’t changed much since its inception back in the late 1990s, nor has its function: You type in the terms for what you want to search, and Google gives you a list of websites. Same old stuff, right?

Not by long shot. The technology behind the Google search bar is evolving at a rate that is mind-boggling.

In February, a research paper published by Google scientists indicated they are getting closer to finding the Holy Grail of information processing: the ability to determine what is true and what is not.

While this might sound a bit Orwellian, to be clear, this new paper from Google’s top thinkers is right in line with the search engine’s core purpose: to cull through the entire pantheon of human thought and knowledge available on the Internet, and provide the most accurate and authoritative information possible to the user.

So how would Google determine what is accurate?
Google has been hard at work creating a body of accepted facts from trusted sources called the Knowledge Graph. This knowledge graph determines what is factual from cross-referencing a variety of sources including Freebase, Wikipedia, the CIA World Factbook, and a number of other crowdsourcing websites. Currently, if you search for something that Google identifies in its knowledge graph, that information is posted at the top or the side of the search results in an encyclopedia-like entry. Google has also created a database called the Knowledge Vault that gleans facts from the entirety of the web. “Facts” in the Knowledge Vault are things widely believed to be true but not necessarily verified. 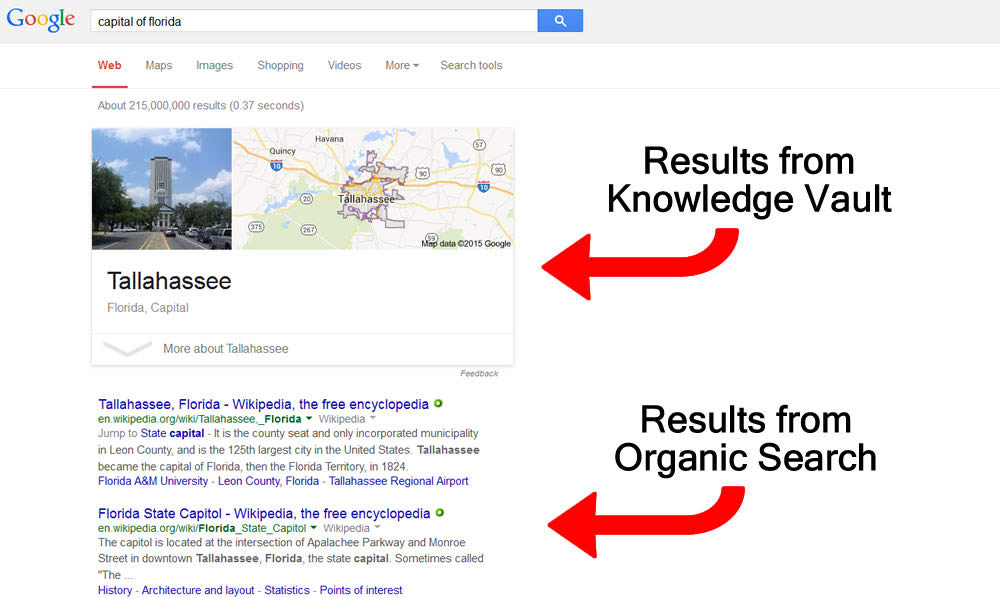 This new proposed algorithm would compare factoids consisting of subject-relationship-attribute (“Tallahassee-capital-Florida,” for example) found in a webpage with those in the aforementioned databases, and rank the web page based on its accuracy. Similarly, websites would also be ranked on the veracity of the information found in the content.

Big Brother Is Ranking You?
The implications of this are considerable and open up a lot of questions. Beyond the obvious effect it would have on the ranking of many political, Hollywood gossip, and conspiracy theory websites, this could also help to serve good journalism ethics for Internet news outlets. In the paper, Google scientists proved what everybody who has spent any time on the web already knows: that the Internet is a jungle of misinformation. When they compared the results of this new, fact-based approach to search (called Knowledge-Based Trust) with the traditional PageRank results, they found the rankings to be independent of one another. Indeed, this is hardly surprising, but the fact that Google could possibly bury websites that serve up inaccurate information is very big news.

Humanity as a whole has never had to take on the question of “what is Truth?” beyond a philosophical standpoint before — at least not on a level that has worldwide implications. And we definitely haven’t had to take on the question of “who decides what is True?” at that level before. When you also consider how Google uses social media and mobile data to make associations between persons, places, things, ideas and, well, just about everything, this does have a “Big Brother” ring to it. Could Google also make associations between people and credible information? Could we all have a “truth ranking” eventually?

We can only hope that Google lives up to its corporate motto: “Don’t Be Evil.”